The clean-up of a forgotten bug in BizTalk360

Kovai Ltd. resolved a lot of bugs in BizTalk360 version 8.8. A whopping 30 bugs were resolved in this version. Let’s talk about one of those bugs which caused some havoc on our system.

On the 12th of March, Kovai Ltd. Released version BizTalk360 8.7.1138.0903. The version contained some bug fixes and some great new features.
Unfortunately, some bugs were also introduced in this version.

After thoroughly testing the version on the UAT environment for one week, we deployed this version during our weekly release window to production. So far so good, no issues during the deployment and for one month, everything seemed fine. Or was I wrong?

On Monday the 7th of May, we started noticing disk performance issues. During the weekend, the disk group – which is monitored by 3rd party software – failed to notify us that the database disk of our BizTalk cluster was almost full. We still had less than 1 gigabytes of free disk space left.

We identified rather quickly most of the disk space was consumed by the BizTalk360 database. We did a database table check and found one interesting table [dbo].[b360_BizTalkDB_Tbl_sizes].

This table increased with about 7 records each second and that for a steady 48 days before we noticed any issues. During this period, the number of records in the table increased to 29 030 400 million records.

We started a few parallel actions to resolve the issue. We quickly asked for more disk storage, we resized some other production databases which were on the same disk and we contacted BizTalk360 support.

They acknowledged the issue and told us it was safe to truncate the table.

Thank you for sharing the report.
With reference to the data in b360_BizTalkDB_Tbl_sizes table:

- Please truncate the data in this table as a workaround solution. The data polling has been fixed in our upcoming release of BizTalk360 v8.8 which is currently under testing. We will inform you once the release is made public. Please run the query to truncate table every week till the BizTalk360 v8.8 is installed.

Together with the disk extension, this helped as a workaround.

For the next three weeks, we made sure we would truncate the table on time to keep the space in balance.

This issue, and about 29 other issues were resolved in version 8.8.

So, once again, after 1 week of thoroughly testing the version on UAT, we deployed it towards our production systems.

Then we closed the ticket, we had a large production release, we had some holidays and we kind of forgot the cleanup of the old bug.

Our reports still showed a lot of records, which is by the way normal for our large environment, but the reserved table space was still there. 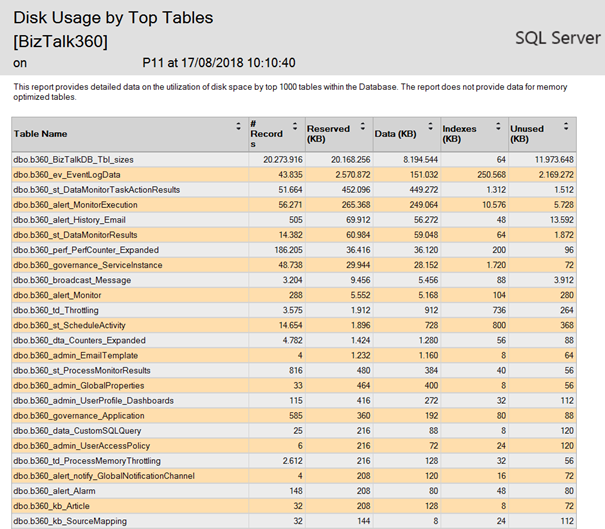 And this bothered me, since we could use the disk space again. I executed the following command to free up the unused disk space.

This bug has taught me once again something new or something easily to forget.

Due this issue we also found that the monitoring of the disks could be improved. The disk which contains the BizTalk360 database (and all our other databases) was not monitored correctly.

It only triggered an alert at 1% of free disk space. So, you could say that the issue also resolved another hidden issue.

BizTalk360 was really on top of this issue and they managed to resolve it quickly before the next release.

On this page you can also find the release notes of the version 8.8 release.